Together with the Agrarmarkt Austria, the gardeners of the LGV-Frischgemüse – Austria’s biggest supplier of fresh vegetables – celebrates the ‘Day of the Tomato’ on the 8th of August. Tomatoes are the absolute favourite vegetable of the Austrians. Around half of the domestic tomatoes are grown in the gardening family enterprises of LGV-Frischgemüse.

For this reason, the absolute favourite vegetable of the Austrians should be brought to the people.

All of Vienna was able to taste the delicious domestically grown tomato, thanks to 29664 distributed tomatoes.

Additionally, the consumers were made aware that around half of the domestically grown tomatoes (around 18 tons) come from the gardening family enterprises of LGV-Frischgemüse and the fresh, aromatic tomatoes are available in the markets already after only a few hours, which can be noted in the taste. 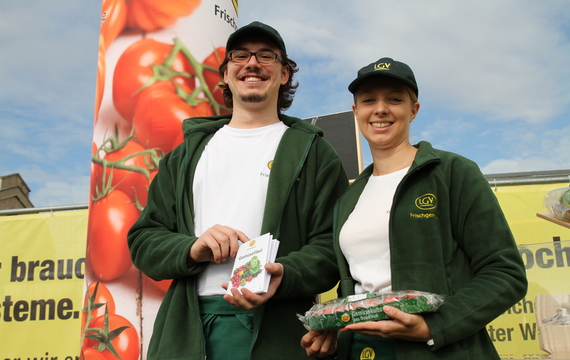