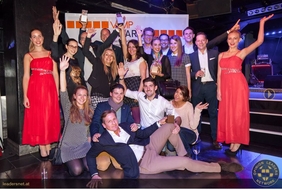 easystaff clears up at the VAMP awards

For the fifth time, the "association of ambient media, promotion and digital out of home" (VAMP) announced the awards, now in ten redesigned categories each with gold, silver and bronze, which were awarded for the most extraordinary ideas and creations in the country in the area of ambient media, promotion and digital out of home, in front of 500 guests at the cult Viennese club, U4. A top expert jury consisting of Harald Wimmer (St. Pölten University of Applied Sciences), Gabi Stanek (Österreichische Marketing-Gesellschaft), Daniela Krautsack (COWS IN JACKETS), Tina Kasperer (Media Award/Mediabizz ), Ulrike Glatt (Henkel Austria) and Alf Netek (Chief Marketing Officer in the Kapsch Group), had the pleasant task of naming the 30 winners, who were chosen based on a points system from numerous submissions made at www.vamp.at.

easystaff won three gold awards (THE BEST AMBIENT MEDIA CAMPAIGN/AMBIENT MEDIA STUNT WITH DIRECT INTERACTION FROM PASSERS-BY; THE BEST CROSS-MEDIA CAMPAIGN and THE CHEEKIEST GUERILLA CAMPAIGN), two silvers and one bronze. We are happy to have received this great recognition for our work and we celebrated properly!